Alfons Westermann completed a locksmith education, then he worked as a joureyman for four years. At the age of 23 he went to Osnabrück for completing a further education to become a mechanical engineering technician. Alfons Westermann was only 25 years old when he took the step into the self-employment – only 2 months later, in November 1989, he presents his motorized radial sweeper on an exhibition in Frankfurt a.M. Here he found his first contacts to customers from the agricultural sector.

First the company was housed in Mr. Westermanns parent’s barn, then it moved into an old dairy of the village Lengerich. In 1995 a hall of 400 m² was built, seven years later this hall was enlarged to 600 m².

The capacities for this economically successful company were not enough and further growing at the previous location was not possible. So there had to be found an alternative: the company moved again in 2007 – to Meppen. 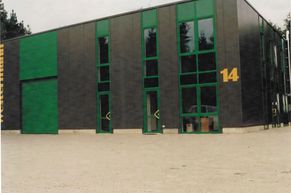 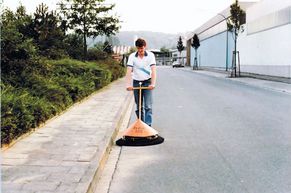 The location, the accessibility and the plot size were decisive for Meppen. “It is not far from the Schützenhof to the city”, declares Alfons Westermann. “Even the inter-regional transport connections are excellent.” The company is located in close proximity to the main road B70 and in short distance to the highway A31. Because of the forthcoming expansion of the street E233 the company soon can be reached very easily from every direction. “This is an advantage for our customers and our own logistic. We can deliver all our products very quickly and without any problems.” 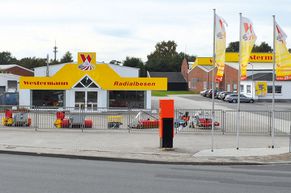 Furthermore also Westermann’s supplier can be reached very good from this location in Meppen. „All material for building the frames of our machines come from this region. Meppen is very central in the Emsland, so it is the ideal control center for us.”

After purchasing an adjoining hall complex in 2014 now the company currently has 7000 m² of hall space and an office complex on a total land area of two Hectares. So there is space for further growing.

You like to know how it looks behind the scenes?

Then take a look at our image film.